Burlesque back on Bourbon Street in French Quarter

The burlesque revival in the United States began in earnest during the early ’90’s and has, after nearly two decades (almost the length of burlesque’s original heyday) hit critical mass. Neo-burlesque has spawned multiple conferences and festivals — including the inaugural New Orleans Burlesque Festival in 2009 — at least one bona fide international celebrity in Dita von Teese, and hundreds of troupes around the world whose styles of strut and flounce run the gamut from historical authenticity to punk-rock feminist gender commentary, and many variations in between. 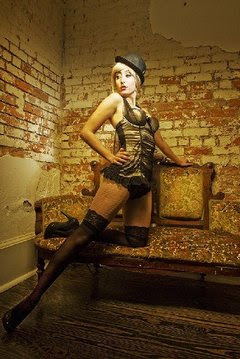 Greg Miles/HandoutTrixie Minx is striving for a party-like atmosphere in her new Burlesque Ballroom show at the Irvin Mayfield Playhouse on Bourbon Street.
The blonde gamine Trixie Minx leads the third burlesque troupe to be in residence at 615 Toulouse St. since 1999, when the Shim Sham Club debuted the thrillingly extravagant Shim Shamettes. The Shamettes were named in homage to the original Shim Sham Club, which was operated on Bourbon Sttreet in the ’30’s by Louis Prima’s brother Leon.
Their show illustrated that commitment to the past, with routines from the middle of the 20th century passed down by their original performers, such as Evangeline the Oyster Girl. Minx, who is as much a comedienne as a slinky ecdysiast, brought a little something different to the table when her Fleur de Tease group became the house troupe at the club, now One Eyed Jacks. (One recent Fleur de Tease dance was a can-can set to the music of the MC5’s “Kick Out The Jams,” performed in Converse All-Stars.)
The Burlesque Ballroom at Irvin Mayfield’s Jazz Playhouse at the Royal Sonesta is Minx’s latest venture, and true to form, it’s something different. For one, the slapstick element of Minx’s goofy sense of humor has been removed for the jazz-club crowd.
Unlike most neo-burlesque shows, the Ballroom is not a stage show presented as if it were theater. Even if the vision for the weekly night didn’t preclude that, the room would; the Jazz Playhouse’s stage barely fits Leon “Kid Chocolate” Brown’s quartet, let alone a dancer. So performers in Trixie’s show use the whole space, including a tiny area in front of the stage, customer’s tabletops, and the aisles between them. Remember Jessica Rabbit’s jaw-dropping crawl through the nightclub in “Who Framed Roger Rabbit?” It’s kind of like that.
The relaxed structure of the show was a joint idea of Minx and the Playhouse staff. The band and dancers share the spotlight, and the very dapper, dry-witted Brown — still crisp in his three-piece suit after a long night that began with an 8 p.m. set — appears as able an accidental burlesque emcee as he is a bandleader.
The addition of a live band always adds an extra, kinetic element of excitement to burlesque, and the laid-back vibe of the show contributed to that even more so. An unplanned drum solo during one of Minx’s performances, set to Louis Prima’s “Banana Split For My Baby,” played like a wild improvised duet for derriere and snare.
No matter how hot the combo, they’re at risk for fading into the background when there are also women with few clothes on onstage. Since the dancers used the whole club to perform — and the ratio of striptease numbers to songs the band played with no dancer was about even — the audience’s attention could, and did, go anywhere.
“I met up with Irvin Mayfield, and we discussed trying to create something new that’s not your typical show,” Minx said. “The main focus with the Burlesque Ballroom is trying to break down the typical barriers between the performer and the audience.”
“Once we hit seven nights of live music, we were looking for creative ways to extend the Playhouse hours and introduce jazz to new audiences,” Mayfield said. “We came up with the idea of collaborating with Trixie Minx and expanding into the ’Round Midnight time slot...,” Mayfield said. (The burlesque show is part of the Playhouse’s new late-night events, called ’Round Midnight. On Saturday, after the 8 p.m. show, the Soul Rebels Brass Band and other brass bands perform.)
“We created an intimate, sexy, jazzy, after-hours destination for mature local audiences,” he said.At the inaugural show on Dec. 11, there was a sharp attrition rate in the packed house after the first hour or so, possibly due to the late hour (the Burlesque Ballroom runs from midnight til 2 a.m.) but the later it got, the more the room took on the vibe of a louche, swanky late-night party. At some point after 1 a.m., Mayfield himself dropped in, wearing jeans and a T-shirt, and took the stage for a dynamic wake-up of a dueling-trumpet jam with Brown.
The only thing disappointing about Brown’s quartet — and this is purely burlesque-wise — was the lack of a saxophone. Sax can express sexiness like no other instrument; during a striptease, drums snap and pop on the bumps, but the long bleat of the sax is the soundtrack of the grind. Drums are the punctuation; the sax is the sentence. Brown is a masterful horn blower, but the lighter tones of his trumpet just didn’t carry the weight of so many undulating hips.
Attendees at the Burlesque Ballroom are having a last-stop-of-the-night experience very similar to what their counterparts on Bourbon Street saw after midnight 50 or 60 years ago.
“The mission of the event is not to have people just sit down and observe, but to really get into it and feel like dancing too,” Minx said. “Like they’re at a party.”
http://www.nola.com/music/index.ssf/2010/01/burlesque_back_on_bourbon_stre.html
Posted by Rosalina at 2:10 AM