Burlesque is Busting Out on Main Street 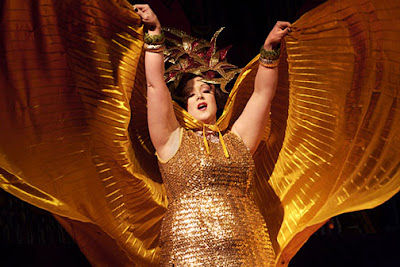 
The Sag Harbor Cinema, tucked in the middle of Main Street, is about to revisit its former identity as a vaudeville house: this Friday, filmmaker and Sag Harbor resident Gary Beeber is holding the local premiere of his film “Dirty Martini and the New Burlesque” at the cinema, the screening of which will be followed later that night by a live burlesque performance featuring two of the film’s stars.
“Dirty Martini and the New Burlesque” is a feature-length documentary about the global resurgence of burlesque in recent years. Released in early 2010 in collaboration with the Seattle International Film Festival, the film premiered at the Moisture Festival in Seattle to wide critical acclaim. Beeber says that the film has now traveled to cities all over the U.S. and Canada, from the Toronto Burlesque Festival to Dallas’ U.S.A. Film festival.
Burlesque, which took root in late 19th century America, hit its peak in the 1930s and 1940s, after which point it suffered a slow decline in popularity chiefly as a result of its promiscuous content.
As Beeber explains, what was later associated with the term “burlesque” was really something entirely different.
“What they were calling ‘burlesque,’” he clarified, “was really lap dancing and other performances you might find in strip clubs. New burlesque comes from modern dance and performance art.”
Dirty Martini, who, as a burlesque performer, has hands-on experience with the evolution and misconceptions of the burlesque form, agrees with Beeber’s conclusion; but where he claims that burlesque was “dead in New York” prior to its comeback in the 1980s, Dirty Martini says that “burlesque never left New York City.”
“In fact,” she continued, “it was New York that really carried the torch for burlesque during those years. New York has always been open, always been experimental…and drag queens also played a large part in keeping that spirit alive.”
As Tigger! — another burlesque legend featured in Beeber’s film, who is dubbed “The Godfather of Boylesque,” “The Original King of Boylesque,” and the first-ever winner of “Mr. Exotic World” (an honor Beeber compared to winning an Academy Award) —
Tigger! (exclamation point required) explains that he, Dirty Martini, and the few other performers who have been involved with the resurgence of burlesque, are “accidental founders” of the new burlesque movement, their interest in the form born from a “frustration with the limitations of the art forms we were already in.”
“Burlesque allows us to bring forms together,” said Tigger!, who was cast in a production of “Much Ado About Nothing” the same day he received the honor of “Mr. Exotic World.”
One of the biggest threats to the widespread acceptance of burlesque is its frequent confusion with erotic stripping. As Dirty Martini describes it, burlesque is, put simply “a theatrical form without words.”
“I’ve been a dancer since I was six,” she shared. After moving to New York to become a modern dancer, she found it difficult to find a niche for her body type.
“People who once would have used ‘differently-sized’ dancers,” she said, “had moved on and started using cookie cutter bodies, which made it so hard for me to find an outlet to perform. When I started to do research, I looked at old videos of burlesque and loved it. It features all body types, it showcases them all.”
Beyond offering an informative glimpse into the burlesque world, all parties involved with the production of “Dirty Martini and the New Burlesque” hope that audiences take away messages of positive body image and female empowerment after watching the film.
“I dare them to try not to!” joked Dirty Martini. “It’s not a preachy film. It’s a beautiful film about people working, working hard, making friends and family in a world that gives them support they might not get elsewhere.”
“Yes, you’re going to see gender play,” she said, “you’re going to see different body types, and different kinds of people, wacky people.”
“This film truly puts women in a positive light,” said Beeber. “Women nowadays have some imaginary problem with their bodies. This film shows that it’s not how you look on the outside, it’s how beautiful you are on the inside.”
“Our job is to deliver a fun time,” said Tigger!, “and yet there is still an implicit message of combining sex, humor and personal liberation.”
“You learn to be more comfortable with your own self,” he said, “It’s not about having the most beautiful body in the room, it’s about understanding how absolutely beautiful every body in the room is.”
Despite the film’s tour around the country, this Friday’s event will be in a class of its own. The evening will start out with a “Pre-movie Gala” at the Richard J. Demato Fine Arts Gallery right next door from 9:30 to 11 p.m., during which time guests will be able to meet both Dirty Martini and Tigger!. Immediately following the screening, Dirty Martini and Tigger! will offer a live performance in the Cinema.
“The performances will be really, really amazing,” said Beeber. “Dirty Martini is a superstar of burlesque. Just the idea of being able to have her in Sag Harbor at all is pretty amazing.”
The Sag Harbor premiere of Gary Beeber’s “Dirty Martini and the New Burlesque” will be this Friday, August 13 at 11 p.m. with a Pre-movie gala and champagne reception next door at 9 p.m. at Richard J. Demato Fine Arts Gallery. Tickets are available at the Sag Harbor Cinema, 90 Main Street, Sag Harbor and cost $15 in advance, $20 day-of.
http://sagharboronline.com/sagharborexpress/page-1/burlesque-is-busting-out-on-main-street-8881
Posted by Rosalina at 2:08 AM