London Burlesque Week 2010: The Good, the Bad and the Bawdy! 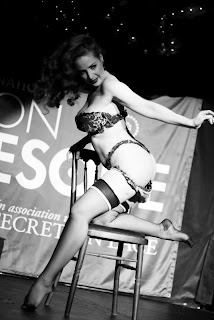 It was the biggest and best burlesque show ever to be brought to Blighty's capital city in a long time, and the line-up would have made Lydia Thompson and her British Blondes proud.
Now that the glitter dust has settled on the eight London Burlesque Week hosting venues - which saw 3000 Londoners and international burlesque connoisseurs lapping up six consecutive evenings of striptease, vaudeville variety and burlesque pageantry- let's take a look at the highlights, shall we.
From classic fan dances reminiscent of the Golden Age; hootchy-kootchy dancers; Bump'n'Grind dames; bawdy singers to circus chic and neo-burlesque starlets, LBW 2010 was larger than life, filled with innuendo and coated with glitter. But what made this year so special?
Last year, you asked Chaz Royal for more shows, more glitz, and more vaudeville, so this year he brought you the Peepshow, Twisted Cabaret, The Speakeasy and Sexy Circus Sideshow along with the Battle Royale Newcomers Contest and the Jetsetters Ball. And of course, because he couldn't bring you all to see Burlesque legend Catherine D'Lish, Chaz brought Catherine over to you.
And judging by the sold out events and toxic-levels of decadence at the shows, this year's festival of tease wouldn't have been possible without the fab-glam audience in attendance, who made the whole thing such a roaring success.

“The London audience dress in style and are as much a part of the show as the performers themselves! The festival has grown in leaps every year and I thank the patrons first and foremost.” - Chaz Royal, LBW Producer

VIP Closing Ceremonies
When it was time to say bye bye mein herr, Chaz did it with a bang'n'grind. The VIP Closing Ceremonies & Awards at the Cafe de Paris was an opulent affair almost bursting at the seams with performers from around Europe, US and Australia. Sunday night's line-up and audience was like the who's who of the burlesque scene.
The inimitable Seattle-based compere - Armitage Shanks - suitably lubricated the evening's talent roll out. His evil honey gravelled voice and witty pun-laced humour helped set a glamorous and louche tone for the closing VIP Gala. In between the talent seamlessly shimmying their way out of their clothes to rapturous applause and the stoically sexy clean-up kitten - Tallulah Tonic - prepping the stage, we were also treated to a Secrets in Lace's fashion show featuring the new Betty Page lingerie collection, talked through by a very bond girl-esque Agent Lynch.
And when it was time for the grand finale, the atmosphere was as electric as a Tesla High Voltage Punishment Corset. Catherine D'Lishes' reputation as the mistress of tease is a well-documented fact, having won nearly every striptease pageant and title available to womankind.
Renowned for her elaborate costumes, Catherine sinuously slinked on to that stage wearing a Swarovski-encrusted corseted dress, underpinned with delicate tulle creating a look of complete fantasy. And when she took her stockings off to the beat of the drum, there was steam coming off those legs and many a sweaty brow in the audience.
What other tricks will the self-proclaimed ‘King of Burlesque’ be pulling out of his little black burlesque book next time - is the question on everybody's lips.

http://londonburlesquefest.com/the-tease
Posted by Rosalina at 2:45 AM