About Burlesque Day At Disneyland 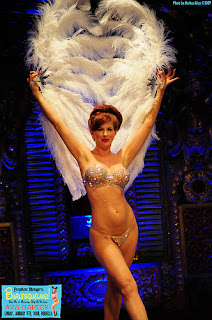 Burlesque Day At Disneyland is the unofficial name for the annual event where performers and fans of burlesque and their friends and families celebrate two nights of Disney themed burlesque (burlesque parodies of disney characters and stories) and one day at the theme park.

We were lucky to have performers from all over the country (and in one case, the world) join us for a pair of great shows and then a trip to Disneyland. After a very successful run in January of 2009, we will be doing it again in March of 2010.

The reason we moved it to March was because most everyone's favorite ride is The Haunted Mansion - which is closed for refurbishment in January.

We hope you can join us at the shows and a great day at D-Land. Our shows aren't for kids, (although there is no nudity) but are great for fans of Disneyland and burlesque alike over 21. In 2009 we even had some imagineers in the audience and they loved it! We hope to make the even bigger and bigger with each year!

This group is ONLY for adding photos that are related to Burlesque Day At Disneyland events. While photos aren't allowed during the actual shows except from our los angeles burlesque photographers, guests are welcome to shoot photos with the performers during intermission and after the show. And who's to stop you from shooting photos at Disneyland? ;D