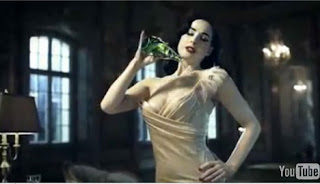 Using celebrities to sell unsustainable products like bottled water is nothing new. From Ellen Degeneres to Jennifer Aniston, celebrities hype the bad habit. The latest, though, is sure to spark a little more attention. Dita Von Teese, an American burlesque dancer that has scored a huge amount of fame among Europeans has become the latest advocate of bottled water through a new commercial for Perrier, in which she showers. So, not only is it promoting a wasteful habit, but also a wasteful use of the product..all to keep a few eyes glued to the television screen. Check out the commercial after the jump.
Seriously? Dita Von Teese pouring Perrier onto herself is the best the company could come up with? What's worse is it's only a portion of the interactive campaign  by the bottled water company, where visitors can try to take pictures of Dita in the dark, or roll dice to get her to either lick her lips or strip down for Perrier. The website warns that it "contains scenes which some young viewers may find disturbing."
Greenies find it disturbing too. But, if this is what bottled water companies have to resort to to get people to buy their products, does it mean the plastic bottle habit is on its way out the door?
Let's hope.
While Von Teese decided bottled water was worth promoting, she at least used her pull for a greener organization well known for using sex to sell its message -- PETA. In 2007, she did an Animal Birth Control campaign with PETA, despite the fact that she does happily wear vintage fur.
http://www.treehugger.com/files/2010/07/dita-von-teese-showers-in-perrier-promotes-bottled-water.php