Burlesque Days Again for the Feather Boa Crowd. Part I 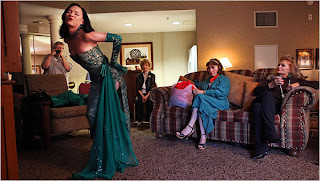 
In a modest hotel suite at the Ho-Chunk Casino, a few women from out of town gather for a reunion. Homemade brownies sit on the counter, along with a peach pie, some cheese curds, several cans of soda and a long, sleek bottle of cherry vodka — a perfect name, they joke, for a burlesque queen.

There is no Cherry Vodka in the room. But Nocturne is here. And La Savona. And Ann Pett. And the Irish Mist. And Bambi Jones, also known as Bambi Brooks, Joi Naymith, the Black Panther Girl, the Mona Lisa Girl, the Garter Girl, Evangeline the Oyster Girl — and, for a while there in New Orleans, “The Girl the Whole Town’s Talking About.”

And Pat Flannery, just Pat Flannery, may also show up. Nearly 60 years ago she did her “How Do You Do?” routine at the old Moulin Rouge in Oakland, wearing dark opera gloves, a polka-dot gown and a look that said, You naughty boy. By act’s end, only the look remained.

But Ms. Flannery might have to cancel her Baraboo appearance. She is 83 now, using a wheelchair and living in a nursing home about two hours north of here — though there is hopeful talk of an overnight furlough for the woman who once saucily sang to would-be suitors:

Either way, Ms. Flannery is present in some of the photographs splayed on a table. Here she is in a skimpy sailor’s outfit, saluting. And here is La Savona in midwrithe, during her signature Scheherazade routine. And here is Bambi in Miami, sharing drinks with Errol Flynn in the mid-1950s, and performing at a senior center in Connecticut just a few weeks ago, where she wowed them.

For that appearance she wore a pink Southern belle number that she proceeded to remove, slowly, before beginning a discourse on the history of burlesque. “I worked the walkers, and I worked the canes,” says Bambi, a limber 79.

Outside this hotel door, civilians plod about, playing the penny slots, shuffling toward the bargain buffet. What do they know of the old bump and grind? Of enthralling men through skin and suggestion — and then puncturing the moment with a bawdy one-liner?

Bambi shares a few of those lines, but you’ll have to catch her at the senior center to hear them; they cannot be repeated here. She also shares a basic burlesque technique. Imagine an apple to your left, an orange to your right, and a coffee bean in front of you. Now follow these pelvic thrusts:

“Hit the apple, hit the orange and g-r-r-ind the coffee.

Oh, yes, we are in Room 1223 at the Ho-Chunk Casino in lovely Baraboo, where the days blur and the chitchat says this is no quilting bee:

“I had been kicking chorus in Cleveland ... I worked with Champagne glasses ... It took 10 guys to get the snake off of her. And I said, ‘So now I understand why you don’t work Massachusetts.’ ”

“That cheese curd is delicious,” Nocturne says. To which Bambi says, “Did you ever work Canada?”

Fifteen years ago, Tanayo, the Costa Rican Dream Girl, handed a worn address book filled with the stage names of lost friends to her civilian friend, Jane Briggeman. So began the Golden Days of Burlesque Historical Society, a nonprofit group dedicated to reuniting those who worked the circuit in the years before 1965: the strippers and dancers, the comics and straight men — the feather boa crowd.

The society had 235 members at its peak, many of whom helped Ms. Briggeman, 54, recover enough memories and photographs to write two books: “Burlesque: Legendary Stars of the Stage,” published in 2004, a year after Tanayo died, and “Burlesque: A Living History,” to be published this year. She continues the cause, in part by maintaining a newsletter with health updates, recent deaths and requests for help, as in:

“Lilli Marlene is looking for Luna, Goddess of the Spirit World.”

But the hook of time has reduced membership to about 135. A list of attendees from a reunion in 2006 includes the names of Lee Stuart, a great straight man; Sunny Dare, the Girl With the Blue Hair; and Carmela, the Sophia Loren of Burlesque. Gone, gone and gone.

As Ms. Briggeman says their names, La Savona, petite, elegant, and wearing a blond wig, sits with a magnifying glass, reading her newspaper notices and advertisements from the days when she was the Czech bombshell who escaped the Communists (“She’s the Cinderella that upset European royalty! Now making her first Toledo appearance!”).

At some point a knock at the door disrupts the memories. Pat Flannery?