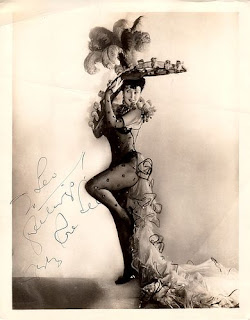 This is a spoken word/comedy album I found (oddly enough) in a bin along with Terry Riley's In C and Cecil Taylor's 3 Phasis (all severely undervalued) at an antique mall in Binghamton, New York last year. When LPs are a dollar or less, and the source is a 10 minute jaunt from my apartment, I inevitably start buying in bulk. Lots of albums I know nothing about, which I generally buy because I like the title or the artwork. Gypsy Rose Lee Remembers Burlesque (StereODDITIES, 1962) was no exception. Recently, I was trying to weed out some of the duds from my collection, which meant listening to many things for the first time. I anticipated chucking this one but was more than pleasantly surprised. This is an excellent record with a rich history behind it--though for anyone who likes burlesque, the name Gypsy Rose Lee is certain to be old hat.

Gypsy Rose Lee was born Rose Louise Hovick in Seattle, Washington in 1911, although her mother later shaved three years off both of her daughters' ages. She was initially known by her middle name, Louise… Louise's singing and dancing talents were insufficient to sustain the act without [her sister] June. Eventually, it became apparent that Louise could make money in burlesque, which earned her legendary status as a classy and witty strip tease artist. Her innovations were an almost casual strip style, compared to the herky-jerky styles of most burlesque strippers (she emphasized the "tease" in "striptease") and she brought a sharp sense of humor into her act as well. She became as famous for her onstage wit as for her strip style, and—changing her stage name to Gypsy Rose Lee—she became one of the biggest stars of Minsky's Burlesque, where she performed for four years.
Eventually she married up into the world of Hollywood, even fathering one of Otto Preminger's children. In films like Ali Baba Goes to Town (1937), Battle of Broadway (1938), Stage Door Canteen (1943), and Belle of the Yukon (1944), she acted alongside such venerable personae as Victor McLaglen, Randolph Scott, Tallulah Bankhead and Katherine Hepburn; and, in B-movie thrillers like the lurid Screaming Mimi (1958), opposite less respectable actors like Phil Carey and Anita Ekberg--still, at the age of 47, trying to belt out a rather painful-sounding "Put the Blame on Mame." She seems to have played exclusively either dancers or nightclub owners, often with jazz artists like Raymond Scott or Red Norvo providing the pulsating soundtracks. Owing to her literary reputation as the author of The G-String Murders and Mother Finds a Body, she portrayed herself as an intellectual among strippers, an attractive notion still being "fleshed" out today in books by Chris Kraus and the latest episodes of Desperate Housewives. Watch her rather tame appearance in Stage Door Canteen, as she lectures the audience on art and culture in a full Victorian gown while subtly removing stockings and garter.
After years of marginal status, Lee's memoirs of life in the biz were turned into the 1959 musical Gypsy, a Stephen Sondheim extravaganza with Ethel Merman playing the titular character [correction: playing Gypsy's mother]. As these things usually go, the stage show became a 1962 film with Rosalind Russell and Natalie Wood; which leads me to think that this 1962 LP was most likely released in order to coincide with/capitalize off the renewed attention to Lee's autobiographical odyssey. A true, ahem, "no rags to riches story," as the clip above phrased it.


The lyrics are by Eli Basse and the music by Bobby Kroll; the whole thing is produced and directed by Fletcher Smith. Not that these names mean anything to me. The "adults-only" feel is similar to Belle Barth's records, though the producers are obviously having a lot more fun with the novelties of stereo technology. The liner notes say it all: "You'll find yourself once again surrounded by the unique atmosphere that's become part of Americana. Here in all their gaudy glory parade the Dolls of the Chorus, the baggy-pants Comics and the Sensational Strippers. Set to the authentic sounds of the bumpy burly-beat pit orchestra, such realism has been captured that you'll swear you see the magenta spots and smell the powder and paint... and even the salami sandwiches!" Though I'm not sure that the words "Americana" and "realism" should ever be included in the same breath without a tinge of irony. The album has plenty of great moments, even some sad ones--particularly on side B, as Gypsy laments the disappearance of burlesque by asking passersby on the street if they share her sentiments. Even the women are sad: "Pardon me madame, how do you feel about burlesque being closed up?" "I think it's disgraceful and I'm going to write a nasty letter to the mayor." "Why, madame?" "Well, since they closed the burlesque theaters I have no idea where my husband is every night."
Gypsy Rose Lee Remembers Burlesque (StereODDITIES, 1962)
http://blog.wfmu.org/freeform/2010/03/gypsy-rose-lee-remembers-burlesque.html
Posted by Rosalina at 2:26 PM