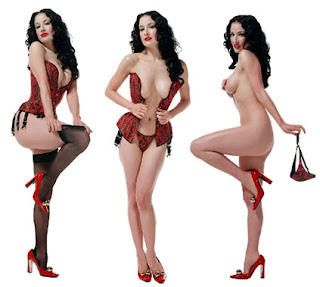 Glamour has come back into the club world of with a bang, through the medium of burlesque. Men and women are now able to cast of their bland clubbing uniforms of T-shirt and jeans, and are looking to the likes of antique Hollywood for inspiration. Three years ago few knew what the word 'burlesque' meant. If it was explained that the heart of burlesque is the striptease, people would only hear the sound "strip" and revert to knowing glances. Trying to explain that a striptease is far more tease than sleaze was futile. Since then the scene has grown, and people are now au fait with the delights of nipple tassels, Dita Von Teese and striptease.

Burlesque doesn't pay heed to flimsy modern concepts of beauty, as portrayed by women's fashion and lads' mags. It appeals to the man who is more turned on by a wiggle in a walk than a 'page three stunna'. It has become a cult among the type of women who can admire a beautiful female body without feeling that it threatens her own sexuality. This is where burlesque comes into its own. We all know women who have great allure but who would never stand up to scrutiny on a traditional dance stage. But put her on a burlesque stage and she lights it up with that elusive quality, that 'je ne sais quoi'. Saying that many an accomplished dancer on a burlesque stage has fizzled rather than sizzled. But, a good stripteaser projects her charisma into the audience, appealing to them on numerous levels - humour, sensuality, sex. The audience must feel she has just given them a nod and a wink, that they are in on her secret.

Paradoxically, clothes are the most important element of a striptease. It has been said that "a stripper earns a lot of money. A stripteaser puts all her money into her next costume." The least a stripteaser is likely to reveal is big pants and pasties. In fact in many burlesque acts there is no removal of clothes whatsoever.

The world of dance is rich with past traditions, such as fan dancing, bubble dance and bump 'n' grind. From this, the burlesque performer may cherry pick elements from which to take inspiration, such as Lili St Cyr and her dressing table act or Sally Rand with her bubble dance. The current piéce de resistance for a stripteaser, and a surefire way to make an audience go wild, is the tassel twirl. Luckily, any shape or size of lady can tassel twirl - even men can do it. Like all good dance forms, it just takes practice.

The biggest and most liberating advantage to being a burlesque performer is there are no rules - no conforming to traditional dance or performing techniques. She can truly be an individual and let her personality shine through - from the characters she portrays, the music, the story she tells and how she chooses to tell it. It's a fun playground.
http://www.theskinny.co.uk/article/36259-what-is-burlesque
Posted by Rosalina at 7:36 AM