Burlesque star says bending rules is part of the fun 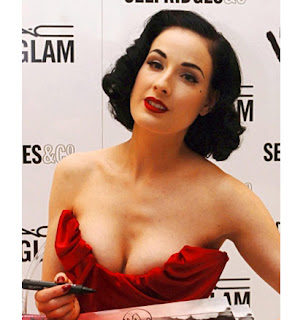 Von Teese, the American "Queen of Burlesque", said that bending the rules was part of the burlesque tradition, making performances "more appealing and exciting".

She said today: "It's not unusual for burlesque to be regulated because it always has been and the stars of burlesque from the past had to deal with it. The challenges of getting around the laws and the risqué element were always a part of what made burlesque exciting."

The Standard revealed that burlesque nights at venues such as the Roundhouse and Koko had been banned by Camden council unless the venues applied for the same licence required for lap-dancing clubs.

Von Teese, 36, said: "In America in the Thirties and Forties there were strict laws and the dancers had to adhere to them. This is why the pastie [nipple tassel] was invented, and the g-string was cleverly constructed! Some burlesque queens chose to break the laws, knowing that being photographed taken away in handcuffs was great publicity, and I love this element of burlesque.

"I've been stripping since 1991 and have travelled all over the world and had to be aware of the laws. Sometimes I complied and sometimes I didn't.

"Perhaps these clubs will install the historic "red light, green light" that they had in burlesque clubs to tell the performers whether the cops were in the house or not."

Von Teese, who has modelled for Jean Paul Gaultier and Vivienne Westwood, is credited with reviving burlesque in recent years.

She recalled how she had to adjust her performance to keep within the boundaries of the law in her first show in the capital. "In the early Nineties, I was forced to go behind a curtain to remove each item of clothing, even my gloves. It was okay for me to be nude, but there were still laws in effect that did not allow for actual striptease in public."
http://www.thisislondon.co.uk/standard/article-23682851-burlesque-star-says-bending-rules-is-part-of-the-fun.do
Posted by Rosalina at 7:38 AM